Students get through the TN Board 12th Chemistry Important Questions Chapter 1 Metallurgy which is useful for their exam preparation.

Question 2.
Distinguish between ore and minerals.
Answer:
Both minerals and ores are naturally occurring compounds of the metal. It is possible to extract metal in large quantities and in an easy manner from ore but it is not so in a mineral. All ores are minerals but all minerals are not ores.

Question 4.
Write the name and formula of the common ores of aluminium, iron and copper.
Answer: 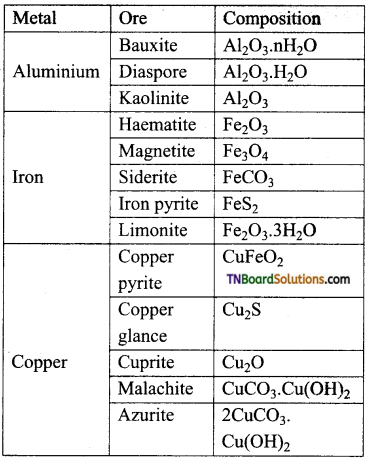 Question 6.
Briefly give the principle involved in gravity separation of concentrating the ore.
Answer:
This method uses the difference in specific gravity between the ore particles and impurities (gangue). The crushed ore is treated with a rapidly flowing current of water. Lighter gangue particles are washed away, leaving behind heavier ore particles.

Question 10.
Explain the term leaching.
Answer:
It is a chemical separation of the ore and impurities. It involves the treatment of the ore with a suitable reagent to make it soluble while impurities remain insoluble. The insoluble impurities are separated by filtration.

Question 11.
Explain how, gold ore is concentrated by leaching, (or) How is leaching used to concentrate native ores of gold?
Answer:
The crushed ore of Au is leached with an aerated dilute solution of NaCN. Gold is converted into a soluble cyanide complex. The gangue, aluminosilicate remains insoluble.

Question 12.
What is cementation? Explain with an equation.
Answer:
Gold can be recovered by reacting the deoxygenated leached solution with zinc. In this process, the gold is reduced to its elemental state (zero oxidation state) and the process is called cementation.

Question 13.
What is the role of ammonia in leaching ores containing nickel or copper or cobalt?
Answer:
When a crushed ore containing nickel, copper and cobalt is treated with aqueous ammonia under suitable pressure, ammonia selectively leaches these metals by forming their soluble complexes viz. [Ni(NH3)6]2+, [Cu(NH3)4]2+, and [CO(NH3)5H2O]3+ respectively from the ore leaving behind the gangue, iron (III) oxides/hydroxides and aluminosilicate.

Question 14.
Explain how bauxite ore is leached in the extraction of aluminium.
Answer:
The bauxite ore is treated with aqueous sodium hydroxide and heated to a temperature of around 470 – 520 K, at 35 atm. The aluminium dissolves forming a soluble complex, sodium meta aluminate leaving behind impurities.
Al2O3 (S) + 2NaOH (aq) + 3H2O (l) → 2Na [Al(OH)4] aq.
The hot solution is separated from its impurities and CO2 gas is passed. Pure alumina gas precipitated
2Na [Al(OH)4] (aq) + CO2 (g) → Al2O3. H20 + 2 NaHCO3 (aq)
The precipitate is washed and dried.

Question 16.
Explain the principle involved in the magnetic separation of the ore with an example.
Answer: 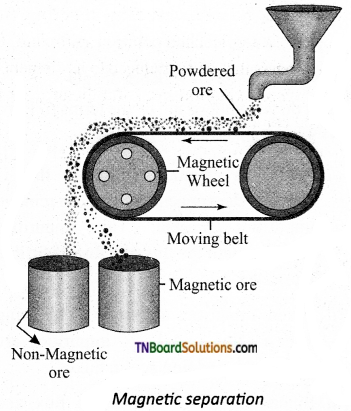 This method is based on the difference in magnetic properties of the ore and the impurities. For example, tinstone, an ore of tin can be separated from its magnetic impurities (wolframite). The crushed ore is poured onto an electromagnetic separator consisting of a belt moving over two rollers of which one is magnetic. The magnetic part of the ore is attracted towards the magnet and falls as a heap close to the magnetic region while the non-magnetic part falls away.

Question 17.
Give chemical equations involved in the process of roasting.
Answer:
Roasting converts sulphide ores to their oxides.

It also removes volatile impurities like moisture and non-metals as their oxides.

Question 18.
Explain the term ‘Roasting’ in metallurgy.
Answer:
Roasting is a process in which sulphide ores are converted to oxide ores by heating the ore in excess of oxygen in a reverberatory furnace below the melting point of the metal.
eg: Galena when roasted gets converted to lead monoxide.
2PbS + 3O2 → 2PbO + SO2
During roasting volatile and non-metallic impurities are removed. The ore is rendered porous so that further steps in the extraction process becomes easy.

Question 19.
What is calcination? Explain with an example.
Answer:
Calcination is the process in which the concentrated ore is heated strongly in the absence of air. During this process, the water of crystallisation present in hydrated oxides escapes as moisture; This method is carried out in a limited supply of air. For example, calcination of the carbonate ore, carbon dioxide example is expelled.

Question 21.
Write chemical equations involved in the calcination process?
Answer:
Calcination is the process that involves the conversion of carbonate ores to oxides.

The water of crystallisation of hydrated salts escapes as water vapour.

Question 22.
Give a brief account of the reduction of metal oxides to metals.
Answer:

Question 23.
What do you understand by the terms (i) Flux, (ii) Slag? Explain with examples.
Answer:

Slag: Slag is a compound formed when flux and gangue can combine with each other. The slag is a feasible mass, which removes, the impurities in the ore. In the extraction of iron, FeO is added as a flux to remove the gangue (SiO2) as ferrous silicate (slag).

Question 24.
Give chemical equations involved in the extraction of copper from copper pyrites.
Answer: 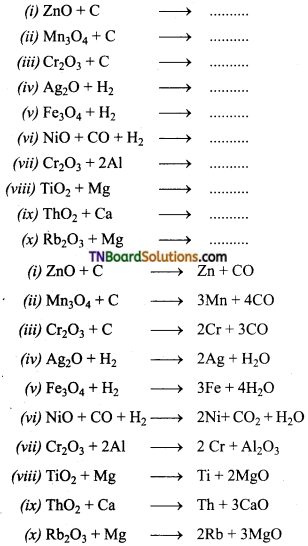 Question 26.
Briefly outline the thermodynamic principle involved in metallurgy.
Answer:
For any process, Gibb’s free energy change ΔG should be negative, i.e.,
ΔG = ΔH – TΔS should be negative where ΔH and ΔS are enthalpy and entropy changes respectively. The extraction of the metals from their oxides is carried out by using different reducing agents. A suitable reducing agent is chosen based on thermodynamics.
Let us consider the reduction of metallic oxide by carbon.

Question 27.
What is the Ellingham diagram? Explain.
Answer:
Ellingham’s diagram is used to obtain the ΔG° values at various temperatures for the reduction of metal oxides by treating reduction as an equilibrium process.
The diagram is made by plotting temperature in the x-axis and the standard free energy of formation (ΔG°) of the metal oxide in the ‘y ’ axis. The resultant plot is a straight line with ΔS as slope and ΔH as ‘y’ intercept. The graphical representation of the variation of standard free energy of formation of various metal oxides with temperature is known as the Ellingham diagram.

Question 28.
Briefly explain the salient features of the Ellingham diagram.
Answer:
(i) Ellingham diagram consists of plots that represent the variation of standard free energy of formation of metal oxides versus temperature.
(ii) These plots help is in predicting the feasibility of thermal reduction of ore. Consider the formation of metal oxide.
2xM (s) + O2 (g) → 2MxO (s)
In this reaction, there is a decrease in the value of ΔS° as M.rO is a solid and 02 is a gas. i.e., ΔS° is negative. Thus, if the temperature is increased, TΔS° becomes more negative. As in the equation ΔG° = ΔH° – TΔS°
TΔS° is substracted, therefore ΔG° becomes less negative i.e., ΔG° is likely to increase with temperature and this trend is confirmed from the curves of metal oxides.
The following observations are made from the curves.
(a) The slope of the curves of formation of metal oxides is positive because ΔG° becomes less negative and increases with temperature.
(b) Each curve is a straight line except when some change takes place in phase. The temperature at which such a change occur is indicated by an increase in slope on the positive side.
(c) In the case of CO, ΔG° decreases as ΔS° increases. This is indicated by the downward trend.
(d) Any metal oxide with lower ΔG° is more stable than a metal oxide with higher ΔG°. This implies that the metal oxide placed higher in the diagram can be reduced by the metal lower in the diagram.

Question 29.
Mention the limitations of the Ellingham diagram.
Answer:

Question 30.
Based on the Ellingham diagram explain.
Answer:

Question 32.
The choice of a reducing agent in a particular reduction depends on the thermodynamic factor. How far do you agree with this statement?
Answer:
Support your opinion with two examples.
From the Ellingham diagram, it is evident that any metal oxide with a lower AG° value is more stable than the metal oxide with a higher AG° value. This implies that the metal oxide placed lower in the diagram cannot be reduced by a metal involved in the formation of oxide placed higher in the diagram. However, the reverse can readily take place.
Thus, Al2O3 cannot be reduced by Cr however Cr2O3 can be reduced by Al.
At temperature 1733K, AG° formation of Al2O3 and Cr2O3 is given below.

The reduction of Al2O3 by Cr may be obtained by subtracting equation (i) and (ii).

ΔG° = 400 kJ mol-1 This reaction is thermodynamically not feasible since ΔG° has a positive value. But the reverse reaction is possible as it has a negative ΔG° value. Similarly, both aluminium and zinc can reduce FeO to Fe, but Fe cannot reduce Al3O2 Or ZnO.

Question 33.
Based on the Ellingham diagram given below predict a suitable reducing agent for the reduction of Cu2O.
Answer: 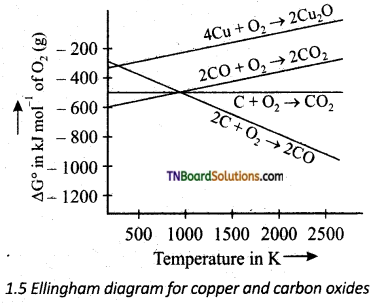 It is seen in the diagram that the Cu20 curve lies almost at the top while the lines sharing the formation of CO2 from C, and the formation of CO from carbon lie much below it. So it is easy to reduce Cu2O to the metal by heating it with coke at temperatures after 500 – 600 K.
Cu2O + C → 2Cu + CO

Question 34.
Show by using the Ellingham diagram given below to predict the possible temperature at which ZnO is reduced to Zn by carbon.
Answer: 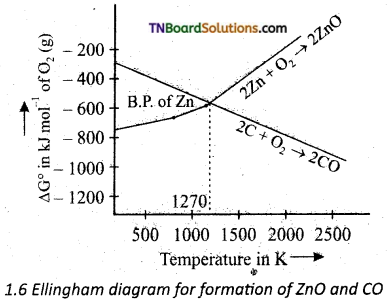 is considered negative and thus ZnO is reduced by coke.

Question 36.
Explain why is the extraction of copper from pyrites difficult than that from its oxide ore through reduction.
Answer:
The standard free energy formation (ΔG°) for Cu2S is more negative than those of CS2 and H2S. Therefore neither carbon nor hydrogen can reduce Cu2S to copper. But the standard free energy of formation of Cu20 (ΔG°) is less negative than that of CO and hence carbon can readily reduce Cu2O to Cu.
Alternatively,
ΔG° / T line for CO has a negative slope and there is no compound CS analogous to CO with a steep negative ΔG°/T line. Thus, carbon is a good reducing agent for oxides and not for sulphides. Therefore sulphide ores are normally roasted in air to form oxides before reducing than with carbon.

Question 39.
Explain how zinc is purified by electrolytic refining.
Answer:
The impure zinc is made the anode while the cathode consists of pure sheets of zinc. The electrolyte is an acidified (H2SO4) solution of zinc sulphate (ZnSO4). On passing electric current pure zinc deposits on the cathode.

Question 40.
State the role of silver in the metallurgy of copper.
Answer:
During roasting, copper pyrites are converted to a mixture of FeO and Cu2O.

To remove FeO (basic impurity) an acidic flux, SiO2 is added during smelting. FeO combines with SiO2 to form ferrous silicate (FeSiO3) as slag and floats over the molten matter and hence can be easily removed.

Question 42.
Mention the application of the following metals, (i) Al, (ii) Cu, (iii) Fe, (iv) Au.
Answer:
Al: Aluminium is the most abundant metal and is a good conductor of electricity and heat. It also resists corrosion. The following are some of its applications.