Question 1.
Define Macro Economics.
Answer:
It is the study of aggregates covering the entire economy such as total employment, national income, national output, total consumption, total investment, total savings, ag gregate demand and supply general price level, wage level, and cost structure.
[OR]
Macro economics is the study of the economy as a whole. It deals with aggregates such as national income, employment and output.

Question 3.
What is meant by an ‘Economy’?
Answer:
Definition by AJ.Brown- “A system by which people earn their living”

“An economy is a cooperation of producers and workers to make goods and services that satisfy the wants of the consumers”. – J.R.Hicks

Question 5.
What do you mean by Capitalism?
Answer:
Capitalism- It means there is total freedom and private ownership of means of production.

Question 6.
Define ‘Economic Model’.
Answer:
A model is an explanation of how the economy, or part of the economy, works.

Question 7.
‘Circular Flow of Income’ – Define.
Answer:
It is a model of an economy showing connections between different sectors of an economy.

Question 9.
Describe the different types of economic systems.
Answer:
It is the methodology of doing economic activities to meet the needs of the society. The three economic systems are:
(i) Capitalist economy:
Total freedom and private ownership of means of production.

(ii) Socialist economy:
There is public ownership means of production.

(ii) Absence of incentive:
In socialism, efficiency is not encouraged so there is reduction in production also.

(iii) Limited freedom of choice:
Consumers choices are limited on goods and services.

(iv) Concentration of Power:
Major decisions are taken only by the Government so, in many cases, the power can be misused.

Question 12.
Enumerate the features of mixed economy.
Answer:
Ownership of property and means of production:
Because of the co¬existence of public and private sectors, production, properties are owned by both and they have the right to use and transfer resources.

Co-existence of public and private sectors:
Private industries are for profit and public sector work for social welfare.

Economic planning:
Economic and national planning is done in common by central planning authority of the Government and it is abided by all sectors.

Freedom and control:
The overall control on the economic activities are with the government.

Question 14.
Briefly explain the two sector circular flow model.
Answer:
The circular flow of income is a model of an economy showing connections between different sectors of an economy. There are two sectors i.e., household and firms.
(i) The household sector receives income from firm sector by providing the factors of productions owned by it.
(ii) The firm gets its income by selling goods and services to the household sector. It sells the entire output of households. In the two sector economy, production and sales are equal.
Diagram of two sector economy 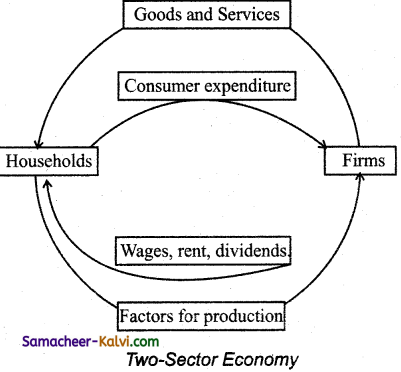 Question 15.
Discuss the scope of Macro Economics.
Answer:
Macro economic study has a wide scope and it covers major areas of economics such as:

(i) National income:
The growth process of an economy depends on the composition and measurement of its national income.

(ii) Inflation:
The general price level is estimated by constructing various price index numbers such as whole sale price index, consumer price index. This is given by macro economics.

(iii) Business cycle:
The cyclical movements such as boom, recession, depression and recovery in the economy are studied as business fluctuations under macro economics.

Question 17.
Compare the features of capitalism and socialism.
Answer: 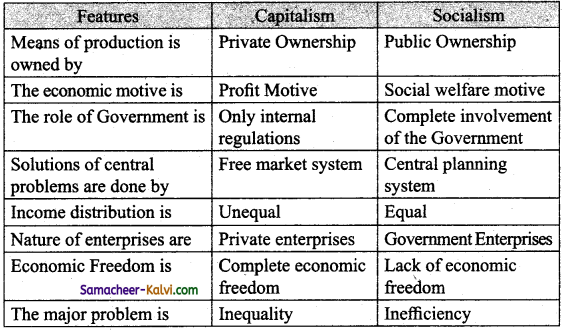 Question 18.
Compare the feature among Capitalism, Socialism and Mixedism.
Answer: 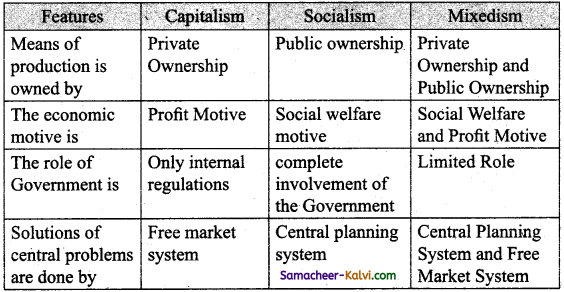 Question 17.
Quantity of a commodity accumulated at a point of time is termed as:
(a) production
(b) stock
(c) variable
(d) flow
Answer:
(b) stock

→ National Income: Total Income of residents of a Country.

→ Business Level: The recurring and fluctuating level of Economic Activity.

→ Balance of Payment: A statement of Countries Economic Transaction with the rest of the world.

→ Laissez Faire: A policy of complete Non-Intervention by Government in the Economy leaving all decisions to the market.

→ Exchange Rate: The price (rate) at which one currency is exchanged for another.

→ Economic Growth: Economic growth is a process of sustained increase in Country’s real income over a long period of time.

→ Balance of Trade: It is the difference between the money value of Exports and Imports of material goods.

→ External Sector: It refers to the Economic transaction of the domestic country with the rest of the world.