Question 1.
What is International Economics?
Answer:
International economics is that branch of economics which is concerned with the exchange of goods and services between two or more countries.

Question 2.
Define international trade.
Answer:
International trade refers to trade or exchange of goods and services between two or more countries. It is trade across political boundaries.

Question 4.
What is the main difference between Adam Smith and Ricardo with regard to the emergence of foreign trade?
Answer:

Question 5.
Define Terms of Trade.
Answer:
The gains from international trade depend upon the terms of trade which refers to the ratio of export prices to import prices.

Question 6.
What do you mean by balance of payments?
Answer:
BOP is a systematic record of a country’s economic and financial transactions with the rest of the word over a period of time.

Question 7.
What is meant by Exchange Rate?
Answer:
It is the price paid in the home currency for a unit of foreign currency that is the rate at which one currency is exchanged for another country.

Question 8.
Describe the subject matter of International Economics.Answer:
It is classified into:

Question 11.
Distinguish between Balance of Trade and Balance of Payments.
Answer:

Question 12.
What are import quotas?
Answer:
Import quota is a quantitative limit fixed on the import of some type of good. This may be set in terms of value or physical units. This is imposed to conserve foreign exchange or to protect domestic consumption.
Import Control:
Imports may be controlled by,
(i) Imposing or enhancing import duties.
(ii) Restricting imports through import quotas.
(iii) Licensing and even prohibiting altogether the import of certain non¬essential items. But this would encburaee smugeling.
By cutting market supply the price of the imported product is likely to rule and black market may develop.

Question 16.
Explain briefly the Comparative Cost Theory.
Answer:
Comparative cost theory was formulated by David Ricardo and it was refined by J.S.Mill. According to Ricardo, the basis of trade is the comparative cost difference. A country can gain from trade when it produces at relatively lower cost.

Illustrations:
Ricardo’s theory of comparative cost is explained with Hypothetical example with production cost of cloth and wheat in America and India. 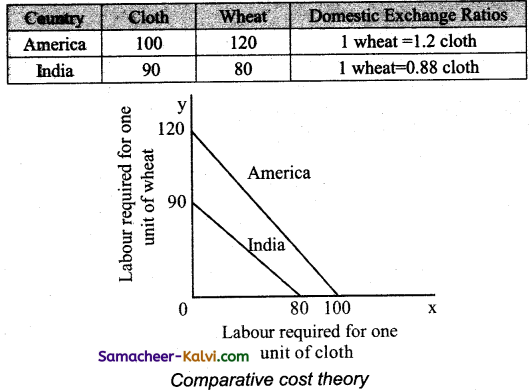 Question 17.
Discuss tine Modern Theory of international Trade.
Answer:
This was developed by Eli Heckscher and Bertil Ohlin which is based on Ricardian Theory. This theory says that the basis for international trade is factor endowment, so it is called as “Factor endowment Theory”.

In the above example, even though India has more capital in absolute terms, America is more richly endowed with capital because the ratio of capital in India is 0.8 which is less than that in America where it is 1.25.

Limitations:
(i) Factor endowment of a country may change over time.
(ii) The efficiency of the same factor may differ in the two cormtries.

Question 18.
Explain the types of Terms of Trade given by Viner.
Answer:
Viner has devised another concept called
(a) “The single factor terms of trade” and
(b) ‘Double factoral terms of trade”

Question 19.
Bring out the components of balance of payments account.
Answer:
The credit and debit items are shown vertically in the BOP account of a country. Horizontally, they are divided into three categories
(i) The current account:
It includes all international trade transactions of goods and services, international services transactions.

Question 20.
Discuss the various types of disequilibrium in the balance of payments.
Answer:
There are three types of BOP disequilibrium
(i) Cyclical disequilibrium:
This occurs of because of two countries passing through different phases of business cycle and the elasticities of demand may differ between countries.

(ii) Secular disequilibrium:
This occurs because of long-run and deep changes in an economy, as it advances from one stage of growth to another. In the initial stages of development imports exceed exports and domestic investment exceeds domestic savings. 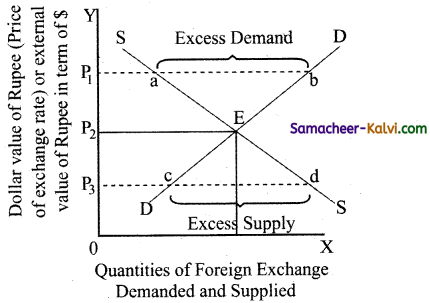 Question 22.
Explain the relationship between Foreign Direct investment and economic develop.
Answer:
FDI – Foreign direct is an important factor in the economy. FDI and Foreign trade are closely related. In, developing countries, FDI in the natural resource sector, including plantations increase the trade volume. Foreign production by FDI is useful to substitute Foreign trade.

FDI is helpful to accelerate the economic growth by facilitating essential imports needed for carrying out development programmes. FDI is encouraged by the factors such as Foreign exchange shortage and acceleration of the pace of economic development. Many developing countries prefer Foreign investment to imports.

Question 1.
Trade between two countries is known as trade.
(a) External
(b) Internal
(c) Inter-regional
(d) Home
Answer:
(a) External

Question 3.
International trade differs from domestic trade because of:
(a) Trade restrictions
(b) Immobility of factors
(c) Different government policies
(d) All the above
Answer:
(d) All the above

Question 9.
Who among the following enunciated the concept of single factoral terms of trade?
(a) Jacob Viner
(b) G.S.Donens
(c) Taussig
(d) J.S.Mill
Answer:
(a) Jacob Viner

Question 11.
Favourable trade means value of exports are than that of imports.
(a) More
(b) Less
(c) More or Less
(d) Not more than
Answer:
(a) More

Question 20.
Benefits of FDI include, theoretically:
(a) Boost in Economic Growth
(b) Increase in the import and export of goods and services
(c) Increased employment and skill levels
(d) All of these
Answer:
(d) All of these

→ Visible trade: Movements of goods, exports and imports of commodities.

→ Credit side: When payment is received from foreign country, it is credit transaction.

→ Debit side: Import of goods and services.

→ Devaluation: Deliberate reduction of the official rate at which domestic currency is exchanged for another currency.

→ Exchange control: The state intervention in the FOREX market.

→ FPI: Entry of funds into a nation where foreigners deposit money in nations bank.

→ FII: It is an investment in hedge funds, pension funds and mutual funds.

→ Ricardo’s theory of comparative cost advantage:
According to Ricardo, “a country can gain from trade when it produces at relatively lower cost. Even when a country enjoys absolute advantage in both goods, the country would specialize in the production and export of those goods which are relatively more advantageous.”

→ FOREX:
“FOREX is the system or process ofconverting one national currency into another, and of transferring money from one country to another.”

→ Equilibrium Exchange Rate – Ragner Nurkes:
“The equilibrium exchange rate is that rate, which over a certain period of time, keeps the balance of payments in equilibrium”.

→ Foreign Direct Investment:
Investment in a foreign country that involves some degree of control and participation in management.