Question 1.
Define Director.
Answer:
The companies act 2013 section 2(34) defines a director appointed to the board of company is “ A person who is appointed or elected member of the board of directors of a company and has the responsibility of determining and implementing policies along with others in the board. It is not necessary, to hold any shares in the company or be an employee. Directors act on the basis of resolutions made in the board of directors meeting according to their powers stated in the articles of association of the company”. 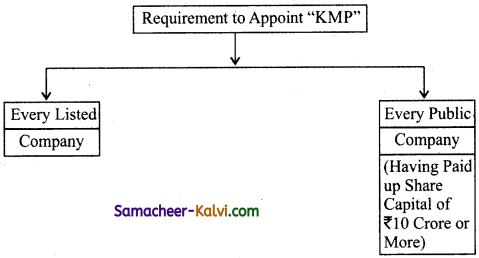 Requirement to appoint “KMP”:
(i) Every listed
(ii) Every public company(Having paid up share capital of ₹ 10 crore or more).

Question 3.
Who is whole time Director?
Answer:
A director is one who devotes whole of his time of working hours to the company and has a significant personal interest in the company as the source of his income.

Question 4.
Who is called as Managing Director?
Answer:
A director is one who is employed by the company and has substantial powers of management over the affairs of the company subject to superintendence direction and control of the board.

Question 5.
Who can be Executive Director?
Answer:
An executive director is a chief executive officer (CEO) or managing director of an organization, company or corporation who is responsible for making decisions to complete the mission and for the success of the organization. In the globalized business world the title of president or of chief executive officer is used instead of managing director.

Question 7.
When are alternative directors appointed?
Answer:
Alternate director is appointed by the board of directors, as a substitute to a director who may be absent from India for a period which is not less than three months. The appointment must be authorized either by the articles of association of the company or by passing a resolution in the general meeting.

Question 8.
Who is a shadow director?
Answer:
A person who is not the member of board but has some power to run it can be appointed as the director but according to his/her wish. A shadow director is a person in accordance with whose directions or instructions the directors of a company are accustomed to act.

Question 9.
What is causal Vacancy?
Answer:
Vacancy arising due to death of director, his resignation or insolvency and not by efflux of time or retirement by rotation. Failure an elected director to accept the office may also constitute a casual vacancy.

Question 10.
State the minimum number of Directors for a Private company.
Answer:

Question 11.
Who are the KMP?
Answer:
The definition of the term key managerial personnel is contained in section 2(51) of the companies act 2013. This section states

Question 13.
Brief different types of Directors.
Answer:
Residential director:
According to section 149(3) of companies act 2013, every company should appoint a director who has stayed in India for a total period of not less than 182 days in the previous calendar year.

Small shareholders directors:
small share holders can appoint a single director in a listed company. But this action needs a proper procedure like handling oyer a notice to at least 1000 share holders or 1/10 of the total share holders.

Nominee director:
A director nominated by any financial institution in pursuance of the provisions of any law for the time being in force or of any agreement or appointed by any government or any other person to represent its interests.

Women director:
As per section 149(1) (a) there are certain categories according to which there should be at least one woman as a director on the board.

Shadow director:
A person who is not the member of board but has some power to run it can be appointed as the director but according to his/her wish.

Question 14.
State the qualification of Directors.
Answer:
In general a director shall possess appropriate skills, experience and knowledge is one or more fields of finance, law, management, sales marketing administration, research corporate governance, technical operations related to company business. According to the different provisions relating to the directors the following qualifications may be mentioned.

Question 16.
Explain how director of a company can be removed from the office.
Answer:
A director of company can be removed from his office before the expiry of his term by.
(a) Removal by share holders:
A company (whether public or private) may by giving a. special notice and passing an ordinary resolution, remove a director before the expiry of his period of office without the proof of mismanagement, breach of trust, misfeasance or other misconduct on the part of the director. If the shareholders feel that the policies pursued by the director are not appropriate, then director can be removed.

(b) Removal by the Central Government:
The central government has been empowered to remove managerial personnel from office on the recommendation of the company law board under the following circumstances.
(i) Where a person concerned in the conduct and management of the affairs of a company has been guilty of fraud, misfeasance, persistent negligence in carrying out his obligations.
(ii) Business company managed by a person inaccordance with sound business principles or prudent commercial practices.
(iii) A person in a manner which is likely to cause injury or damage to the interest of trade industry or business.
(iv) A person with the intent to defraud its creditors, members or any other person.

Question 18.
What are the duties of a directors?
Answer:
Collective duties of directors:
Directors as a part of board perform certain duties collectively. The following are some of those duties exercised collectively.

Question 19.
State the powers of the directors.
Answer:
The power of the Directors are grouped into four different heads.
Statutory powers of Directors:

Power only with a resolution:

Question 20.
State the Criminal liabilities of Directors.
Answer:
Directors will be liable with a fine and imprisonment or both for fraud of non-compliance of any statutory provisions in the following situations where:

Question 8.
What is the statue of Directors who regulate money of the company?
(a) Banker
(b) Holder
(c) Agent
(d) Trustees
Answer:
(d) Trustees