Question 3.
Differentiate tax and fee.
Answer:
Tax is a compulsory payment by the citizens and fees are another important source of revenue for the Government.

Question 4.
Write a short note on zero based budget.
Answer:
It involves fresh evaluation of expenditure in the Government budget, assuming it as a new item or every year is considered as a new year. The budget is done fresh. It starts from zero. The Indian Government presented Zero Based Budgeting (ZBB)first in 1987 – 88.

Question 5.
Give two examples for direct tax.
Answer:
The Tax levied on person’s income and wealth and it is paid directly to the Government.
Eg: Income tax and Wealth tax.

Question 6.
What are the components of GST?
Answer:
The components are of three types. They are COST, SGST and IGST.

Question 7.
What do you mean by public debt?
Answer:
Money or credit owned by the Government to domestic or foreign lenders.

Question 8.
Describe Canons of Taxation.
Answer:
According to Adam Smith, there are four canons or maxims of taxation.
(i) Canon of ability:
Tax should be imported based on people’s ability.

(ii) Canon of certainty:
The Government should ensure that there is no uncertainty regarding the rate of tax or the time of payment.

(iii) Canon of convenience:
The method of tax collection and the timing of tax payment should suit the convenience of the people, so the tax can be paid without any difficulty.

(ii) Limit to borrowing:
Both have to apply restrain with regard to borrowing. The Government also cannot live beyond its means.

(iii) Resource utilisation:
Both have limited resources. So they have to use it at maximum.

(iv) Administration:
The effectiveness of measures of both Government and private depends on administrative machinery. If it is insufficient and corrupt, it will result in wastages and losses.

Question 10.
What are the functions of a modern state?
Answer:
The modern state is a welfare state and not just police state. The state assumes greater rules by creating economic and social overheads, ensuring stability both internally and externally. 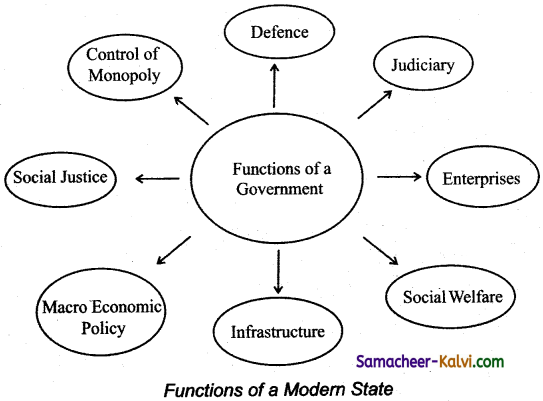 Question 12.
Point out any three differences between direct tax and indirect tax.
Answer:

Question 14.
Mention any three methods of redemption of public debt.
Answer:
The process of repaying public debt is called as redemption.
(i) Sinking fund:
According to this, the Government will credit a fixed amount of money to this fund and when it matures, it is paid along with the interest.

(ii) Conversion:
Old loan is converted into a new one and the interest is reduced.

(iii) Budgetary surplus:
Whenever there is surplus budget, it can be utilised to pay the debt.

Question 15.
Explain the scope of public finance.
Answer:
It is a study of the financial aspects of Government.
(i) Public revenue:
It deals with methods of raising public revenue such as tax and non tax.

(ii) Public expenditure:
It studies about fundamental principles that governs the Government expenditure and control it.

(iii) Public debt:
It is the method of raising loans from internal and external sources.

(iv) Financial administration:
It deals with the study of the different aspects of public budget. Budget is the annual master financial plan of the Government.

(ii) Equitable:
The indirect tax satisfies the canon of equity when higher tax is imposed on luxuries used by rich people.

(iii) Economical:
The cost of collecting taxes is less because it is collected by the producers.

(v) Convenient:
Indirect taxes are levied on commodities and services and they don’t feel the burden of paying the tax.

Question 17.
Explain the methods of debt redemption.
Answer:
The process of repaying a public debt is called redemption.
(i) Sinking fund:
According to this the Government will credit a fixed amount of money to this fund and when it matures, it is paid along with the interest.

(ii) Conversion:
Old loan is converted into a new one and the interest is reduced.

(iii) Budgetary surplus:
Whenever there is surplus budget, it can be utilised to pay the debt.

(v) Repudiation:
Government will get rid of the burden of payment of a loan during crisis.

(vii) Capital levy:
When the Government imposes levy on the capital assets owned by an individual, it is called as capital levy. Especially war time debt obligation.

Question 18.
State and explain instruments of fiscal policy.
Answer:
Fiscal policy:
It is an instrument of macro economic policy of the modem Government. It is implemented through fiscal tools, fiscal levers.
Instruments are:
(i) Taxation:
Taxes transfer income from the people to the Government, an increase in tax reduces disposable income. So the taxation should be raised to control inflation. During depression, taxes are to be reduced.

(ii) Public expenditure:
It increases wages and salaries of the employees and thereby the aggregate demand for goods and services. So public expenditure is raised to fight recursion and reduced to control inflation.

(iii) Public debt:
When Government borrows by floating a loan, there is transfer of funds from the public to the Government. At that time of interest payment and repayment of public debt, funds are transferred from Government to public.

Question 19.
Explain the principles of federal finance.
Answer:
Federal finance refers to the system of assigning the source of revenue to the Central as well as State Government for the efficient discharge of their respective functions. The principles are:

(i) Principle of independence:
The Government should have separate sources of revenue, authority to levy taxes to borrow money and to meet the expenditure.

(ii) Principle of equity:
The resources has to be distributed among the states to earn their revenue.

(iii) Principle of uniformity:
In the federal system, each state should contribute equal tax payments for federal finance. But this principle cannot be followed because the taxable capacity of each unit is not of the same.

(v) Principle of fiscal access:
Government will make possibility for the central and state Government to develop new source of revenue with in their prescribed fields to meet the growing financial needs.

(vii) Principle of efficiency:
The financial system should be well organised and efficiently administered. There should be no scope for fraud. No one should be taxed more than once in a year. Double taxation should be avoided.

(viii) Principle of administrative economy:
Each Government should be accountable to its own legislature for its financial decisions, that is the Central to the Parliament and the State to the assembly.

Question 20.
Describe the various types of deficit in budget.
Answer:
Deficit budget is one where the estimated Government expenditure is more than expected revenue budget deficit is of four types.
(i) Revenue budget:
Excess of Government revenue expenditures over revenue receipts. Revenue deficit is the Government is living beyond its means to conduct day to day operations.
Revenue deficit RD = Total Revenue Expenditure (RE) – Total Revenue Receipts (RR) (when RE – RR >0)

(iv) Primary deficit:
It shows the real burden of the Government and it does . not include the interest burden on loans taken in the part.
Primary Deficit (PD) = Fiscal Deficit (FD) – Investment Payment (IP).

Question 21.
What are the reasons for the recent growth in public expenditure?
Answer:
In welfare state, the Government has to perform several functions, activities like social, economic etc., Activities are the cause for increase in public expenditure.
(i) Population growth:
The growth in population needs investment in all areas especially youth education require more investments and for old people transfer payments

(iii) Government subsidies:
The Government has been providing subsidies on a number, of items such as food, fertilisers etc., Because of the massive amount of subsidies, the public expenditure has increased.

(iv) Debt servicing:
The Government has been borrowing heavily. As a result it has to make huge repayment towards debt servicing.

(vi) Urbanisation:
Now the urban population has increased to about 43%. It requires heavy expenditure on law and order education and civic amenities.

(vii) Industrialisation:
Setting up of basic and heavy industries involve huge capital and long gestation period. Under planned economy, such industries and started by Government and the UDC need a strong infrastructure like transport, communication, power etc., so there is increase in public expenditure.

Question 2.
One of the following is NOT a feature of private finance:
(a) Balancing of income and expenditure
(b) Secrecy
(c) Saving some part of income
(d) Publicity
Answer:
(d) Publicity

Question 5.
Consider the following statements and identify the correct ones.
(i) Central Government does not have exclusive power to impose tax which is not mentioned in state or concurrent list.
(ii) The Constitution also provides for transferring certain tax revenues from un|on list to states.
(a) (i) only
(b) (ii) only
(c) both a & b
(d) none
Answer:
(b) (ii) only

Question 7.
The direct tax has the following merits except:
(a) equity
(b) convenient
(c) certainty
(d) civic consciousness
Answer:
(b) convenient

Question 8.
Which of the following is a direct tax?
(a) Excise duty
(b) Income tax
(c) Customs duty
(d) Service tax
Answer:
(b) Income tax

Question 15.
Methods of repayment of public debt is:
(a) Conversion
(b) Sinking fund
(c) Funded debt
(d) All these
Answer:
(d) All these

Question 17.
The word budget has been derived from the French word “bougette” which means:
(a) A small bag
(b) An empty box
(c) A box with papers
(d) None of the above
Answer:
(a) A small bag

→ Public finance: Study of the financial aspects of government.

→ Public expenditure: The income of the government from all sources.

→ Tax: Compulsory payment by the citizens to the government.

→ Public debt: Loan taken by the Government from the citizens within the country.

→ Public revenue: The income of all the Government from all sources.

→ Budget: Annual financial statement of income and expenditure of the Government.

→ Vote on account: The budget can be presented in the middle of the year. (When election are due or any political situation). This is also called as lame duck budget.

→ Zero based budget: Fresh evaluation of expenditure in Government budget. Canon of taxation: Qualities which a good tax should possess.

→ Public revenue:
• “A Tax is a compulsory payment made by a person or a firm to a Government without reference to any benefit the payer may derive from the Government” – Anatol murad.
‘ • “A Tax is a compulsory contribution imposed by public authority, irrespective of the exact amount of service rendered to the tax payer in return and not imposed as a penalty for any legal offence” – Dalton.

→ Public debt:
• “The debt is the form of promises by the Treasury to pay to the holders of these promises a principal sum and in most instances interest on the principal. Borrowing is resorted to in order to provide funds for financing a current deficit” – Philip E.Taylor.
• “The receipt from the sale of financial instruments by the Government to individuals or firms in the private sector, to induce the private sector to release manpower and real resources and to finance the purchase of these resources or to make welfare payments or subsidies” – Carl S.Shoup.

→ Budget:
• Reney Stoum – “It is a document containing a preliminary approved plan of public revenue and expenditure”.
• Bastabale – “ The budget has come to mean the financial arrangements of a given period, with the usual implication that they have been submitted to the legislature for approval’.

→ Definition of Fiscal policy:
“The term fiscal policy refers to a policy under which the Government uses its expenditure and revenue programmes to produce desirable effects and avoid undesirable effects on the national income, production and employment” – Arthur Smithies “By fiscal policy is meant the use of public finance or expenditure, taxes, borrowing and financial administration to Jurther our national economic objectives” – Buehler.